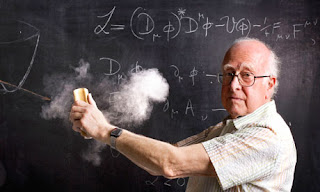 "The Guardian has reported that Peter Higgs, the particle physicist claiming the existence of the Higgs Boson, the so called ‘God particle’ which most claim supposedly explains away anything related to the supernatural, has stated in no uncertain terms that Richard Dawkins as an embarrassment [to the scientific community] for his fundamentalist attacks on religion. He [Dawkins] is a materialist on a mission to prove by physical science his materialism....so...he takes it on faith in the meantime.

...His most famous book, The God Delusion, gives only TWO PAGES out of the whole book to address the most famous and credible 'proof' (in the scholastic sense) for God's existence--the cosmological argument. St. Thomas Aquinas is severely misrepresented with the summary that "There must have been a time when no physical things existed. But, since physical things exist now, there must have been something non-physical to bring them into existence, and that something we call God.” (Dawkins, 77).

Seriously, that's what Dawkins believes Aquinas' argument for God's existence consists in. No mention of teleology. No mention of Act and Potency. No mention of Contingency or prime matter. In fact, Aquinas never even uses the term 'physical things' because there was no distinction to be made...this is merely Dawkins imposing on Aquinas his physicalist/materialist view of the world, and it is either because he is intellectually dishonest towards his readers or he is just a twit who is making huge philosophical claims without having studied it seriously in his life. Most educated people, even in the scientific community, would see the error in reading Aquinas and comparing it with Dawkins' summary of him. The pop mob that Dawkins has following him is a different story.

The rest of The God Delusion is filled with ad hominems addressing what so and so Christian scientist said and how they really misunderstand science, and it is filled with arguments against theological ideas, miracles and God, because he is reducible to a teddy bear to get through life for weak people. I believe that Peter Higgs, insofar as I barely know him, is at least aware that there is a significant tradition of reason based arguments for the existence of God... Greek/Catholic/Christian philosophical tradition. How can someone have the intestinal fortitude to write a book addressing the topic of God's existence and ignore the history 'proofs' for God's existence in favor of William Paley and the biggest intellectual clowns that Christendom has had inside (and outside) their walls? They aren't straw arguments, they are simply weak arguments. Unfortunately they are appealing when put in a pop book--popular only because "what a travesty it would be if God didn't exist."

Peter Higgs agreed with some of Dawkins’ thoughts on the unfortunate consequences that have resulted from religious belief, but was not satisfied with the evolutionary biologist’s way of dealing with believers in God. He said he agreed with those who found Dawkins’ approach “embarrassing”.

The Guardian said: "... Higgs argued that although he was not a believer, he thought science and religion were not incompatible. “The growth of our understanding of the world through science weakens some of the motivation which makes people believers. But that’s not the same thing as saying they’re incompatible. It’s just that I think some of the traditional reasons for belief, going back thousands of years, are rather undermined....But that doesn’t end the whole thing. Anybody who is a convinced ... can continue to hold his belief. It means I think you have to be rather more careful about the whole debate between science and religion than some people have been in the past.... He said a lot of scientists in his field were religious believers. “I don’t happen to be one myself, but maybe that’s just more a matter of my family background than that there’s any fundamental difficulty about reconciling the two.”

That is light years different than the picture Dawkins presents."

My Original Source:
Check it out.

Their Original Source:
The Guardian Article

And, a link to what the Higgs field ("God Particle") means for Christianity.

"At the end of forty days Noah opened the window of the ark that he had made and sent forth a raven. It went to and fro until the waters were dried up from the earth." Genesis 8:6-7
As the raven searched for things of interest, I explore the world.